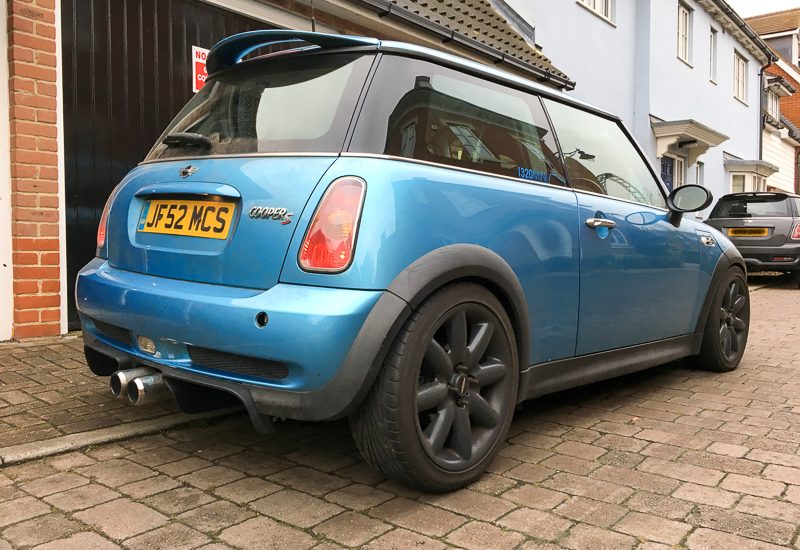 With the track day season over for another year for all but the bravest (or possibly foolish) drivers I’ve started to think about jobs to be done before the spring comes. With the power upgrades now done I’m looking at making the car quicker through the corners. My plan was always to add some descrete aero upgrades to the car without making it shout race car too loudly. I make no excuses for the fact that I am in many ways inspired by Nigel Pinder’s awesome Mk2 Golf the Pinderwagen. Nige has really gone the whole hog with his car but it’s trailered to the track.

One of the most under utilised areas for improvement is the underside of the car, maybe becase it’s more of a black art or doesn’t have a visual impact of adding a big wing. Fortunately the R53 GP and later R56 Minis have a flat floor from the factory which fits the R50/R52/R53 cars. The ultimate factory R56 (the GP2) also has a rear diffuser, I’d decided to do down this route as the parts are still available and considerably cheaper than the Mini Challenge parts. The theory is that by smoothing the airflow under the car the air moves more quickly than the air flowing over the body work (given the brick like shape of the Mini there is clearly a difference!) causing a low pressure area that means the car is pushed into the ground. It also doesn’t increase the drag unlike a large rear wing.

Before I get into any details of the steps needed to get the R56 GP2 diffuser to fit on the R53 let me make it very clear, if you don’t like the idea of cutting up new parts you’ve just brought this is not the job for you! Secondly my car has been running a straight R56 style exhaust (now using a R56 JCW back box) for some time, if you’ve not done the conversion you’ll have more work to do. If you are interested I wrote a post about an earlier version of the exhaust here.

Before you start you’ll need the R56 GP2 Diffuser (it comes in 5 parts: a rear section, two tunnels and two brackets) the nice folk at Orranje can supply you with the full kit of parts including the fittings. I’ve brought a fair number of parts for my car from them and the service is always excellent.

If you plan to do the necessary modifications yourself you will need some basic hand tools: